We Reach Out to Mike and his Dogs 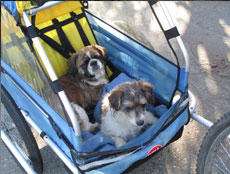 In another interesting encounter, one day last winter while we were doing outreach a homeless woman told us about a little dog with a broken back that could only drag himself around on his front paws. She didn’t know the name of the man who had the dog, but thought he stayed down by Comanche Creek.

We spent all that day and many others trying to find him, asking everyone we encountered if they knew about the dog and if they did to please tell its owner that we just wanted to get him some help. We never did locate them, but months later I got a call from a man who works with Orchard Church giving out free meals to the homeless on Sundays at the civic center. It turns out he was trying to make a wheelchair for a little dog with a broken back.

I met him and Mike, the dog’s owner, at the Jesus Center and discovered that they really needed a new bike trailer so Mike could pull both of his little dogs behind his bike. The one he had was barely functional. Since we had several bike trailers that were donated to us, we were able to get a nice newer one to Mike.

We also arranged to get the dog with the broken back to the vet and to get both of the dogs groomed, but sadly Mike never showed up when we were supposed to meet at the Jesus Center, and we haven’t seen him around town for awhile. One thing Mike said to me that seems especially significant, and perhaps explains why he didn’t show up at the JC that day was: “My dogs are the only thing that keeps me going. I would give up without them.” In order to get them to the vet and to the groomer, he was going to have to trust me to take them and bring them back. It’s probably no surprise that he couldn’t do that.